The El Paso and Dayton mass shootings have everybody screaming at the top of their lungs.

Just going on Twitter the past 24 hours has fried my brain.

The Left was back to its usual schtick of clamoring for more gun control…..

But the response on the Right…good lord.

I’m going to single out two elected officials on the Right that made me cringe in the past day.

Easily one of the worst Senators in Mordor.

On pretty much every issue that matter —military intervention to domestic spying— Graham has become an establishment stooge.

On the gun issue, Graham is terrible.

He’s now doubling down on his push for red flag gun confiscation bills.

Do not be fooled by the title of these bills.

They’re infringements on our basic liberties.

Under red flag laws, you could have your guns confiscated based on the mere suspicion that you pose a threat to someone.

One day you tick a friend, family member, or an acquaintance off.

They know you own firearms and, in an act of spite, inform the police about this.

Next thing you know a SWAT team is pounding on your door demanding that you turn over your guns.

If you resist… I don’t need to tell you what happens next.

Just ask the now deceased Gary Willis about this.

But this is only the tip of the iceberg. 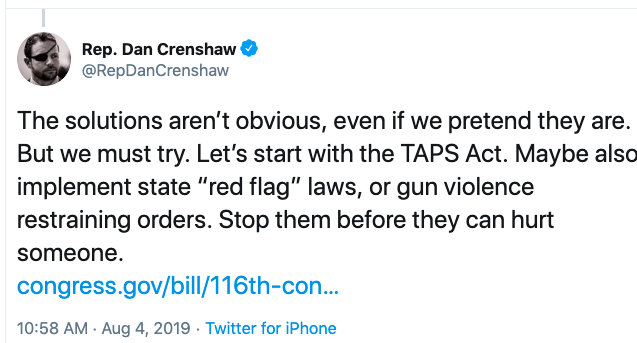 He’s getting behind The Threat Assessment, Prevention, and Safety (TAPS) Act.

Like red flag laws, TAPS is a fourth amendment destroyer.

In the words of David Leach of The Strident Conservative, TAPS would “encourage law enforcement to give EVERYONE a personal threat assessment (adults and children) and single out those they deem as future threats.”

From there, this information could later be used to “stop dangerous individuals before they can commit an act of violence.”

Terrible, if you ask me.

Even more shameful is that supposed defenders of small government are getting behind these abominable schemes.

The previous generation of “freedom” advocates have failed, so it’s time for new blood to step in.

The quality of opposition against tyrannical forces is paramount.

If the opposition is weak, expect to get trampled.

That’s why you must get educated, build skills, and fight back.

No more sitting on the sideline.

No more waiting for false prophets to save you.

No more complaining on the message boards.

It’s the 4th quarter and two minutes are left on the clock.

Are you ready to step up?

Or do you want to fold like a lawn chair?

But if you’re one of the select few who’re ready to slay gun-grabbing gremlins, your journey starts now.

Get his eBook The 10 Myths of Gun Control here.

Get his eBook How Socialism Destroyed Venezuela here.